Your cart is empty

10 men's underwear myths that should've died a long time ago

We’re living in the age of information. The internet gives us access to a vast wealth of human knowledge (and yes, pictures of kittens doing cute things). Even so, myths and other misinformation persist - likely because it’s much more fun to look at pictures of kittens than to learn facts.

Take the underwear you’re wearing right now. If you’re like most men, you bought your underwear in a pack from a box store the same day you got some groceries, without putting much thought into it. You’ll proceed to wear them until they’ve got enough holes or questionable stains in them and then go out and by another pack whenever it’s convenient.

Why aren’t you treating yourself to high-quality men's underwear? Probably because you believe some of the 10 myths we’re about to bust. Read on and see!

1. Underwear is all the same

Your underwear is the most functional article of clothing you wear each day. If it’s not up to snuff, that can have a serious impact on your day-to-day life. If you're wearing boxers under skinny jeans, the extra fabric can get tangled up and cause constant adjustment issues. If you don’t have enough support, all the extra bouncing can leave you sore. If you’re a heavy sweater, the moisture-wicking fabric can be a lifesaver. Get the picture? There’s absolutely a difference between high and low-quality men's underwear.

This idea is simply ridiculous. You wouldn’t show up to a job interview without combing your hair, would you? Part of growing up means taking care of your own damn self, and that means taking the time to find quality undies. A grown man shouldn’t be seen adjusting himself throughout the day or just let chafing happen without fixing the problem.

This is another one of those bits of medical advice that people spout out without understanding the complexities of reproductive health. While it’s not a good idea to wear underwear that’s too constrictive, that just means you need to buy underwear that fits you correctly. In other words, you don’t need to abstain from briefs or other form-fitting undies because of unsolicited medical advice from one of your not-a-doctor buddies.

4. Your partner doesn’t care what you wear

A ratty old pair of underwear is a near-universal turn-off. But even if you’re sporting a brand new pair of undies, it doesn’t mean you’re dressed to impress. The right style of men's underwear can flatter your natural body type for those times you’re ready to flaunt your stuff. When you’re feeling confident, your partner will see the difference - and you will, too.

6. The boxers vs. briefs myth

There’s no hard rule against owning and enjoying multiple styles of men's underwear. Boxers and briefs are only the beginning of the styles and cuts of underwear that are out there to choose from. Boxer briefs have shattered this great debate, and the introduction of other styles like trunks, square cut briefs, and even major improvements to sexier styles like thongs means you have tons of options when it comes to choosing your favorite pair of underwear.

7. Find one style and stick with it

There’s no reason you need to limit yourself to one style of men's underwear, and the cut you choose should depend on the day you want to have. Trunks can be great for intense workouts. Boxers are the ultimate choice for a lazy day at home. If you love hitting the trail in super short shorts, you’re going to need a pair of briefs so you can keep your skivvies discreet. And some days, you may want to go with your most seductive option.

8. You just have to break them in

You’re thinking of shoes here. Underwear should feel right the moment you put them on, and the best men's underwear will continue to feel good even after it's been washed time and time again. If your underwear doesn't fit right when you first slide them on, there’s no reason to keep going back to them.

When it comes to shirts and pants, there’s a lot of room for interpretation on whether or not something fits you. Not the case with men's underwear. The wrong size will lead to wedgies, unsightly underwear creases in your skin, support issues, or skin bulges. Too loose, and you risk showing some crack every time you bend over. Too tight, and it can mess with your circulation in an area where blood flow is crucial.

10. Wedgies are a fact of life

At Tommy John, we are committed to creating the perfect pair of men's underwear. And that means an adjustment-free fit that doesn’t bunch, roll or ride up, no matter how active you are each day. That means no more wedgies, and no more digging around in your trousers to set things right. All of our underwear is backed with our no questions asked guarantee: If you don’t love your first pair, we’ll exchange them or refund you in full. 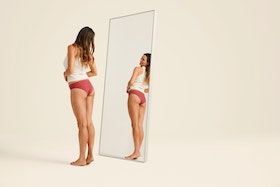 Why cheeky undies are the perfect balance you've been looking for
Next
You are leaving the Tommy John website and going to a third party website. The privacy policy of the third party website may differ from that of Tommy John and may provide less security. Tommy John assumes no responsibility for the products, services, and content on the third party website.
Select OK to continue or Cancel to remain on the Tommy John website.
Sign up & save 20% off on your first order.
Shop Women Shop Men Gift Cards Fabric Guide
Sign In Order History
Contact & FAQ Returns & Exchanges Shipping & Return Policy Tommy John Stores Store Locator Retailers
Military Discount Student & Teacher Discount Healthcare Hero Discount
About Careers Press Blog Reviews
Sign up & save 20% off on your first order.
Your feedback matters to us
Let us know about your on-site experience.
Privacy Policy | Terms & Conditions | Do Not Sell My Information | CA Transparency in Supply Chains Act | Copyright ©2021Tommy JohnAll rights reserved.